1Spatial supports SWDE for a more sustainable management of its water resources.

As part of World Water Day, we gave the floor to David Brunet, Director of Network Performance- GIS-RF at the Société Wallonne des Eaux, to talk about SWDE's innovative projects for a more sustainable management of its water resources.

The strategy to continuously monitor water consumption, as well as the large-scale deployment of new leak detection techniques, has enabled SWDE to reduce its water losses by several million m³ in a few years. SWDE relies on Geographic Information Systems (GIS) for water management, and the expertise of 1Spatial consultants to carry out its innovative projects, to improve the efficiency of distribution networks.

One of the company’s objectives is to be able to continuously monitor the performance of the water distribution network and to detect leaks in the shortest possible time, to limit water losses. To this end, the company has set up several targeted leak detection programs.

To measure water losses, SWDE manages the network in subsets, called “cells”, which are sub-networks of 10 and 15 kms, limited by closed valves or metering points. In these different areas of the network or "district metered areas" (DMA), it can obtain a clear view of the incoming and outgoing volumes, and thus quickly control water losses.

The GIS used by SWDE allows it to create cells with precision, before going into the field to validate the positions. The analyses relies on tools that check whether the subsets (i.e. the selected sections) have a cut-off valve or a metering point at each end.

"These are elements for which GIS has been of great use," commented David Brunet. 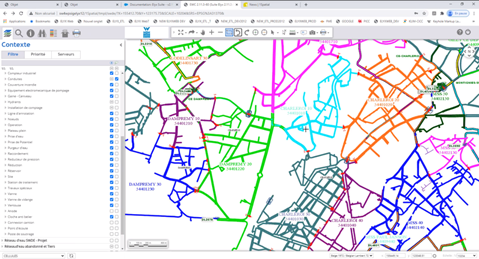 “The GIS solution is also a resource for showing the length of kilometers of pipes in the network, as well as the number of customers in each cell. In addition, it communicates with two interconnected software systems used by SWDE, namely ERP and SCADA The interconnection of the system automatically allows information from one to feed into the other, and vice versa, allowing the systems to share accurate and up-to-date information. These three tools exchange information with each other, so in reality you have a suite of network performance software. As soon as something is changed in the GIS, the information is updated in the other software. We have a very dynamic tool."

Using the solution, SWDE can also geographically assign network criticality values to objects in relation to each other. For example, houses at the beginning or end of networks, as well as on separate networks that are not connected, may not have the same criticality value.

SWDE is also working to better size its networks to save energy from pumping processes. For this, SWDE has a lot of interaction with its GIS.

Within the current period of innovation, the company is starting to develop Smart Grids and smart sensors. It is working on an innovation project that incorporates a connected valve, which communicates its opened or closed status, following the action of one of its agents. These sensors will also give SWDE the opportunity to enter information on the age of the valve into its solution. This information can be queried in the GIS and will give the team important metrics for specific equipment maintenance. “We see that GIS plays a very important role, because having the right information in GIS allows us to put the right sensor in the right place.” commented David Brunet

GIS also contributes to the decision making process around the placement of noise loggers. SWDE is working on modelling that will allow them to optimize the number of sensors placed on the pipes. The information stored in the system, including pipe characteristics such as pressure, age, type and diameter is used to study how these specific characteristics influence the effectiveness of the sensors.

"GIS tools give us a lot of information and allow us to determine correlations between the data to get more accurate and refined data. We have a simple data architecture in which GIS manages the Master Data, which must be up to date. This is used by other systems that help us determine correlations, to make better decisions" concludes David Brunet.