Today, with approximately 900 employees active in 71 municipalities of the Province of Liege in Belgium, RESA capitalises on the know-how acquired by the teams of the former Associations Liégeoises d’Electricité et de Gaz (Liege Electricity and Gas Associations) (ALE and ALG) over the last 90 years. Benefitting from long experience and specialised expertise, it displays a strong identity which places it incontestably among the most efficient Distribution Network Managers of the Walloon energy landscape.

To ensure the maintenance of its heritage while remaining at the peak of performance and innovation, RESA chose to modernise its Geographic Information System (GIS) by migrating to the 1Spatial Elyx Gas solution, which is currently in production. However, RESA noticed, when importing DWG data collected via third parties, geometric and topological inconsistencies that prevented using all the power of Elyx Gas. Adrien Legat, GIS Director & Underground Utilities Manager with Resa, explains:

"It was important to guarantee the quality of the data inherited for optimal exploitation of this GIS, which is more powerful than the old GIS but thus less permissive in terms of data quality."

In order to solve this problem, RESA called in 1Spatial’s geodata experts and explained to them the problems of inconsistency encountered in the data, related to the topological relationships of the gas profession, geometries and attributes.

"1Spatial has provided us with geometrically and topologically corrected data by launching validation and correction rules to automate the correction of data. We could reuse these rules in the future. A powerful, agile and interoperable data validation solution."

1Spatial used its patented rule engine, 1Integrate, to detect problems, to validate data quality, but also to correct nonconformities, by transformation rules, where a logic of improvement could be specified with the customer.RESA has reduced the time needed to correct its data by more than 80% thanks to automation via 1Integrate. This has saved time and money by automating tasks that were previously, performed manually. Simultaneously, it has also increased the trust of its users by supplying them with quality data whilst allowing the intelligent processing within Elyx GIS to work effectively.The advantages of the proposed solution

The advantages of 1Integrate compared to a traditional ETL tool were numerous, but the following were particularly appreciated by the authors of rules:

Performance: 1Integrate processes the data in an object-oriented data cache, the amount of data that can be processed is not limited to the memory but to the size of the disk. As a result, the RESA data could be processed in their entirety, in one session and in less than 2 hours per run of data.

Agility: the validation rules of 1Integrate are “declarative” and are thus written to specify what makes the data correct. 1Integrate will therefore report all objects that do not comply with this rule. This made it possible to find and solve problems that RESA would not have found with a traditional SQL query method; moreover, the “pseudo-code” language used with 1Integrate is entirely directed to spatial analysis and thus has native functions which make it possible to express the geometrical operations very directly.

Interoperability: it allowed the data experts to write, share and comment on business rules via the web user interface and to generate and share reports and data quality indicators to facilitate discussions with RESA about the problems found in order to solve them. In addition to the proven power of the 1Integrate solution, the management fully mastered by the project manager and the proximity of the Belgian consultant team of 1Spatial greatly contributed to the success of its implementation.

Results in line with the customer’s expectations

Over the course of the project, data provided in DWG format by the AutoCad® designers could be validated and improved to 99.99%, leaving only a few errors to be handled manually in Elyx GIS.

In addition to the agility and interoperability of 1Integrate when writing rules, we found that caching enabled geometric operations to be performed faster than with Oracle Spatial, which itself performs better than GISs. A speed ratio of up to three times has been found in favour of 1Integrate and this ratio becomes even more favourable if the amount of data increases.

"In addition to the fact that 1Spatial has successfully put the new Elyx GIS into production, the rules developed for validating and correcting the large volumes of data imported automatically and efficiently into the GIS have made it possible to realise in 6 months what would have required 36 months of tedious and repetitive manual work" concludes Adrien Legat. 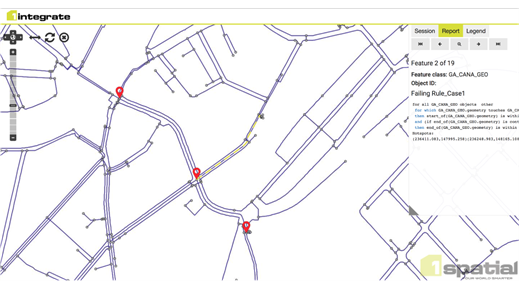