If you missed the 1Spatial & Ordnance Survey PSR workshop, Jonathan Shears, Managing Director UK & Ireland at 1Spatial, pulled together this summary of its outcomes.

We are all aware of the plight that the recent energy crisis has caused many in our communities to find themselves faced with fuel poverty. The uncomfortable headline news has raised the spectre once again of those more vulnerable in society needing priority assistance to pay for heating, food, and clothing, to receive priority health care and protection from freak weather events.  Whatever has caused individual vulnerability, the Priority Services Register (PSR) seeks to ensure those who are vulnerable are quickly, accurately, and comprehensively identified so that service providers can prioritise the assistance they need.

Designed to give vulnerable customers access to the services they need, we coordinated this workshop as an open discussion forum to create a Community of Interest specifically aimed at discussing key issues and challenges surrounding creating and maintaining PSR databases.

As location master data management specialists, our interest in PSR stems from the underlying data on which PSRs are based. Delivering the full benefits of a PSR can be no better than the quality and content of the data on which it is based, so this workshop was focused on identifying the requirements around PSR data quality, coverage, and accuracy. But we were keen also to seek opinions on whether there was a need for more national coordination, requirements for a data standard, and what PSR governance and best practice should be in place but beginning with a clearer understanding of who the PSR stakeholder community needs to be. 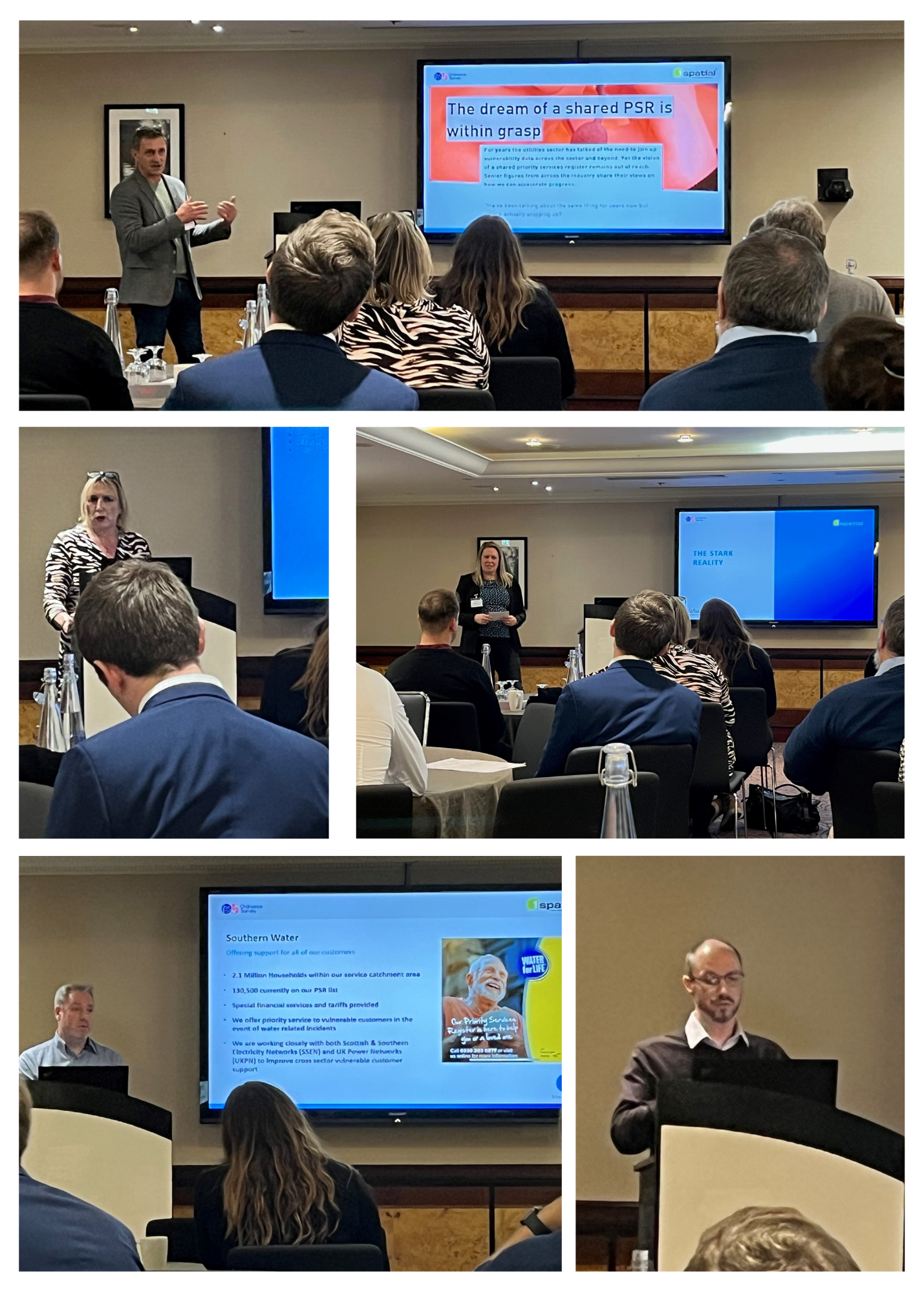 What is a priority services register or PSR?

During the opening of the workshop, we heard from Holger Kessler on why this is such an important project for the UK, especially in the face of the cost-of-living crisis and posing the question that we have the data so why can’t it be shared to better support people? Carolyn Delehanty presented a series of harrowing real-life stories to emphasise the hidden plight and extent of deprivation in our society.

This was followed by lightning talks from Helen Lord, CEO of the Vulnerability Services Register Ltd on the lack of an overarching strategy or process to identify those in vulnerable circumstances. Jon Ross from Southern Water talked about their experiences on how a lack of data sharing between stakeholder groups can hamper efforts to ensure all those that qualify for support, actually receive it and how a more joined-up approach to PSR, at least regionally, would make PSR much more inclusive. Finally, we heard from Andrew Humphreys from SAVVI/RedQuadrant on how more interoperability and local engagement would enable a more effective and efficient way to tackle vulnerability and introduced a Scalable Approach to Vulnerability Via Interoperability (SAVVI) project SAVVI model as an example of how data sharing and data warehousing allows Councils to not only fulfil their responsibilities under the Civil Contingencies Act but also addressing vulnerabilities among their citizens.

The group split into three to workshop three key areas that came from the lightning talks.

The group believed the public would be more likely to trust their data being held locally rather than nationally. A culture shift in the sharing of data is needed and a technical solution is required to ensure organisations only see the data they need. The line between usability and privacy is jagged and utilities didn’t necessarily even need to know what the vulnerability was, just that property X or property Y had vulnerable people living there, so attend those first.

2. Need for a National PSR

Again, they believed that there wasn’t a need for a national register (i.e., geographically national) as services are provided locally or regionally. However, what did transpire was that local/regional service providers need to be joined up and able to share and/or access the data.

Given that PSRs cover a variety of purposes and use cases, the contents of a PSR and hence the data requirements needed to support it will also vary. A few vulnerability reasons were identified:

Within each, there would be a specific use case.

Each use case would require a different set of data access points each via potentially different data custodians and data controllers. To support a joined-up PSR system, it was envisaged that data needed to support a use case is fulfilled via APIs, to avoid data duplication and hence provide more efficient version control (important to support high currency requirements).

This group felt that there was a need for a government policy to mandate data sharing between the various organisations. While there are some individual agreements between utility companies it doesn’t solve the problem.

They also discussed how they identified 99 different types of vulnerabilities in one pilot. The question was are they trying to do too much instead of focusing on the main known life-threatening vulnerability type?

Again, the final points discussed were privacy and GDPR, also having a more focused approach.

Overall, the session was highly informative and educational and given the diverse representatives in the group from utilities, Government bodies and technical providers it was agreed that future workshops, hackathons or thought leadership groups would be beneficial.

If you would like to get involved or contribute and be part of the debate that ‘Makes A Difference’ please submit this form and we will ensure your participation in future events.